Jay Deitcher’s writing career has been a natural development. As a recovering addict turned social worker, Jay says he writes “to give a voice to flawed characters, like myself.” Growing up, Jay was always writing. He says his career as a social worker was a natural progression from recovery toward helping others. In his early adult life, he was advised away from the arts towards social work because of the vision of success his father had. However, as his job as a social worker progressed, his writing accompanied. 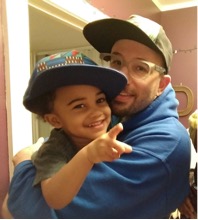 Most of Jay’s writing is about personal experiences: trauma, addiction, sexual assault, anti-Semitism, Judaism, mental illness, his relationship with his wife and children. The list goes on. His writing life is his personal life, and he makes himself vulnerable in his writing. This allows him to reveal experiences others might also face, so they can not only see themselves in his writing but learn something. Jay shared, “I want to write characters that are so honest that they accept themselves for all their flaws.”

Most of Jay’s inspiration for writing comes from what he reads, and he reads a lot. The writing community produces work from which he gains inspiration. This writing—and community—helps him thrive. A self-proclaimed “competitive person,” the community allows him to channel this competitive impulse in a way that also allows for collaboration. He gets excited by his friends’ successes, which encourages and inspires him to write. Jay shared that the most valuable takeaway he had from his Indiana University Writers’ Conference experience was the community he gained. He found people who cared about his writing, transforming it for the better.